How to Break That Wrong Habit 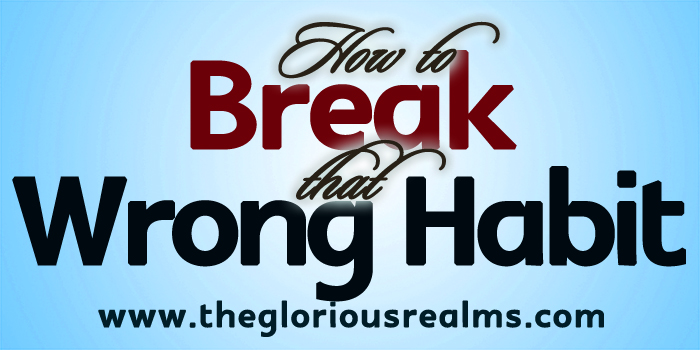 Habits are very powerful things in our lives. Management expert Stephen Covey wrote a very popular book on the habits of successful people. In other words, he invariably made the case that success and failure are both simply a product of HABITS.

What is a habit? A habit is an automatic pattern of behaviour in reaction to a specific situation, gotten through frequent repetition.

In other words, when we feel stressed, we might listen to music, or we sleep, or seek out a someone to talk to, or some inspiring work to do. The situation that causes the habit-forming action is called the TRIGGER, and the action we have repeated so much as a result of that trigger is called a habit.

What we do when a repetive trigger comes up is very key, as we would tend to do peform this habit again and again, and it would soon have control over our lives.

In other words, when we feel stressed, we might get angry, start repeating to ourselves why this just proves that we are a failure, smoke or drink, or we could just decide to speak positive words to ourselves, read and speak inspiration from the Word of God, or just start doing something constructive.

The thing about a habit is not in the trigger (or cause). The thing is in the response. Human beings have been noticed to ALWAYS develop ways to deal with different repetetive events. For example, a guy feels stressed up, and he takes a drink. Over time, this becomes a habit, that could turn into a serious drinking problem if he does not control it, because the trigger (stress) is something that always comes up from time to time.

Let’s say the same young man has a great love for music, and instead of turning to alcohol when he feels stressed, he gets a guitar which he takes out and starts playing when he is feeling down down. The thing is, with the same trigger of stress, one person would become a raging alcoholic that would be a failure in life, and another would take the same trigger and use it to turn himself into a success.

What do you do when you are stressed, or feel disrespected, or angry, or you are just feeling down? Is this activity turning you into a better person, or is it weakening your personality?

You see, when we are starting out a habit, we control it, but after the habit has been developed, it controls us. This is why Apostle Paul said “I would not be brought under the power of ANY (wrong habit).

We are all a product of habits. But how are they so powerful? They are able to be this powerful because when we peform an action because of a trigger, it forms a very weak connection in the brain. Then, when we keep repeating that action, the connection becomes so strong to the extent that when that trigger comes up, your brain would have no choice but to make you to repeat the habit.

The key then is to use this same power to form helpful habits that would make us successful, and not take us down in life.

The good thing about habits is they can be easily replaced, if we take a decision to, we take them one by one, and we keep to the decision.

Start noting the habits that have not been of help to you today, and take a decision to start replacing them, one at a time.

You would become the success of your dreams before you expected to see it.

Time Management Tips To Make You Be at the Top of Your Game!

You Can Still Do It!

The System is Spiritual