Admin February 19, 2014 Business, Diligence, Don't Stop!, Financial Prosperity in Your Life, Giving, Goals, Knowing the Will of God, Stories of Successful People, The Habits That Create Success, The Importance of Diligence, Your Power As A Christian 0 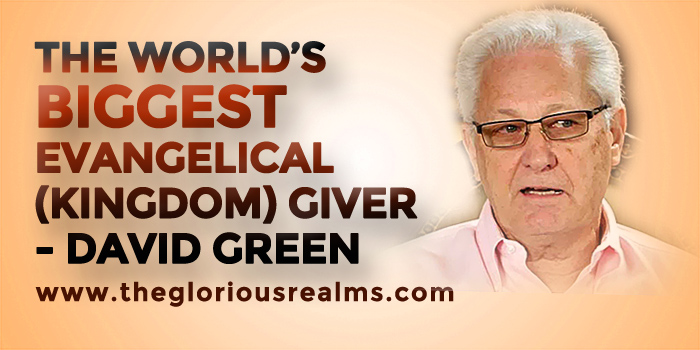 David Green’s story reads like something out of a fictional story. From a loan of $600, he has built up a business currently worth about $3 billion. Not only that, he is the LARGEST recorded individual benefactor to charismatic and Word of Faith (evangelical) churches worldwide. This article is culled from the October 8, 2012 issue of Forbes. Its original title was ‘David Green: The Biblical Billionaire Backing The Evangelical Movement’. Do read on:

David Green insists God is the true owner of his $3 billion arts and crafts chain. Acting as His disciple, Green has become the largest evangelical benefactor in the world—with plans for unprecedented gifts once he’s in heaven.

Fresh off an inspection of Hobby Lobby’s sprawling 5.5 million-square-foot distribution warehouse in Oklahoma City, the company’s CEO, David Green, retreats to his office in the adjacent executive building, where he surrounds himself with a collection of homely elephant figurines. His coffee table is draped with a bird’s-eye-view photograph of his corporate campus, annotated with scribbles in black marker that show the expansion under way.

Fresh off an inspection of Hobby Lobby’s sprawling 5.5 million-square-foot distribution warehouse in Oklahoma City, the company’s CEO, David Green, retreats to his office in the adjacent executive building, where he surrounds himself with a collection of homely elephant figurines. His coffee table is draped with a bird’s-eye-view photograph of his corporate campus, annotated with scribbles in black marker that show the expansion under way.

He means that literally. David Green has one of America’s great, little-known fortunes, having turned a makeshift manufacturing operation in his living room for arts and crafts into a retail monster, with 520 superstores in 42 states. Green and his family own 100% of the company and he ranks No. 79 on our list of the 400 richest Americans, with an estimated net worth of $4.5 billion. Hobby Lobby’s cash spigot currently makes him the largest individual donor to evangelical causes in America.

“I don’t care if you’re in business or out of business, God owns it,” says Green. “How do I separate it? Well, it’s God’s in church and it’s mine here? I have purpose in church, but I don’t have purpose over here? You can’t have a belief system on Sunday and not live it the other six days.”

There are very few members of The Forbes 400 who bring religion to work. Most notable are Chick-fil-A’s Truett Cathy and Forever 21‘s Jin Sook and Do Won Chang, born-ag ain Christians who keep Bibles in their office and print John 3:16 on the bottom of each shopping bag. More typical is Warren Buffett, who admits to being agnostic. Green joined Buffett’s Giving Pledge in 2010: His public letter doing so quotes 2 Corinthians (“Each of you should give what you have decided in your heart to give, not reluctantly or under compulsion, for God loves a cheerful giver”). And that’s about all that Buffett and Green have in common philanthropically. Rather than try to cure malaria or fix the U.S. public school system, he’s turned his arts and crafts empire into a massive missionary organization, the equivalent of the largest church bake sale in the world. Hobby Lobby takes half of total pretax earnings and plunges it directly into a portfolio of evangelical ministries. Green keeps the total amount of his charitable contributions private, but based on information received from him and discussion with various recipients, FORBES estimates his lifetime giving at upwards of $500 million.

In the U.S. Green’s wealth produces the physical underpinnings of dozens of churches and Christian universities. It began in 1999, with a former V.A. hospital building in Little Rock, Ark. that he purchased for $600,000 and converted into a church. Green has since spent over $300 million donating about 50 properties. The word is out: Ministries approach him constantly with proposals for their new church or Christian community center–only one in ten is chosen. He won’t help them unless they pass a doctrinal vetting process, which includes questions about the Virgin Birth. Even well-known pastor Rick Warren needed to pass Green’s muster before the billionaire handed his Saddleback Church a 170-acre ranch property last August to use as a retreat.

“You can’t have a belief system on Sunday and not live it the other six days.”

Green’s influence, though, comes through education; he currently carries evangelical education on his back. He gave a former Ericsson plant in Lynchburg, Va., which he bought for $10.5 million, to Jerry Falwell’s Liberty University in 2004. He gave an entire campus to Zion Bible College in Haverhill, Mass. in 2007, at a cost of $16.5 million. In 2009 Green snapped up the 217-acre former campus of Massachusetts prep school Northfield Mount Hermon for just $100,000, spent $9 million on renovations and plans to give it away. Christian universities across the country have been auditioning for this attractive location, causing a minor stir in the liberal New England town of Northfield. In his biggest splash, Green bailed out scandal-ridden, debt-laden Oral Roberts University with a $70 million gift in 2007, a donation with strings attached: Green got to replace the college’s misgoverning board of trustees. Today, with his son Mart chairman of the board and one of his granddaughters a new alumnus, Green calls Oral Roberts a “healthy university.”

Read the continuation of this article from the Forbes.com site here.